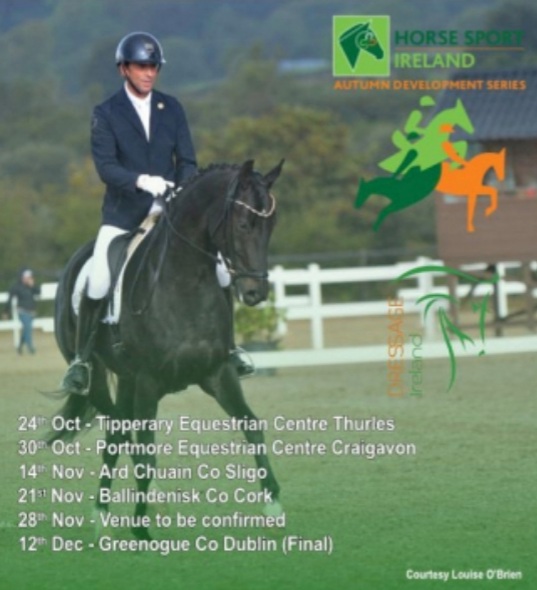 Competition Date: Saturday 27th Nov 2021 09:00 Entries closing on: Sunday 21st Nov 2021 23:45 Withdrawals until: Tuesday 23rd Nov 2021 12:00. (No refunds are possible after this date). Location:   Show Secretary/Organiser: Lorna O’Hare Description: Dressage Ireland are delighted to announce that Horse Sport Ireland have kindly sponsored the Autumn Dressage Development Series again this year   Eligibility   All full rider and horse/pony combinations registered with Dressage Ireland are eligible to compete in the Preliminary to Grand Prix classes, once the horse has…

Unregistered entries accepted only in accordance with regional capacity.  Preference will be given to Dressage Ireland members and registered horses.  Unregistered combinations are not eligible for prize money or rosettes.

Qualifying for the Final

This website uses cookies to improve your experience while you navigate through the website. Out of these cookies, the cookies that are categorized as necessary are stored on your browser as they are essential for the working of basic functionalities of the website. We also use third-party cookies that help us analyze and understand how you use this website. These cookies will be stored in your browser only with your consent. You also have the option to opt-out of these cookies. But opting out of some of these cookies may have an effect on your browsing experience.
Necessary Always Enabled
Necessary cookies are absolutely essential for the website to function properly. This category only includes cookies that ensures basic functionalities and security features of the website. These cookies do not store any personal information.
Non-necessary
Any cookies that may not be particularly necessary for the website to function and is used specifically to collect user personal data via analytics, ads, other embedded contents are termed as non-necessary cookies. It is mandatory to procure user consent prior to running these cookies on your website.
SAVE & ACCEPT